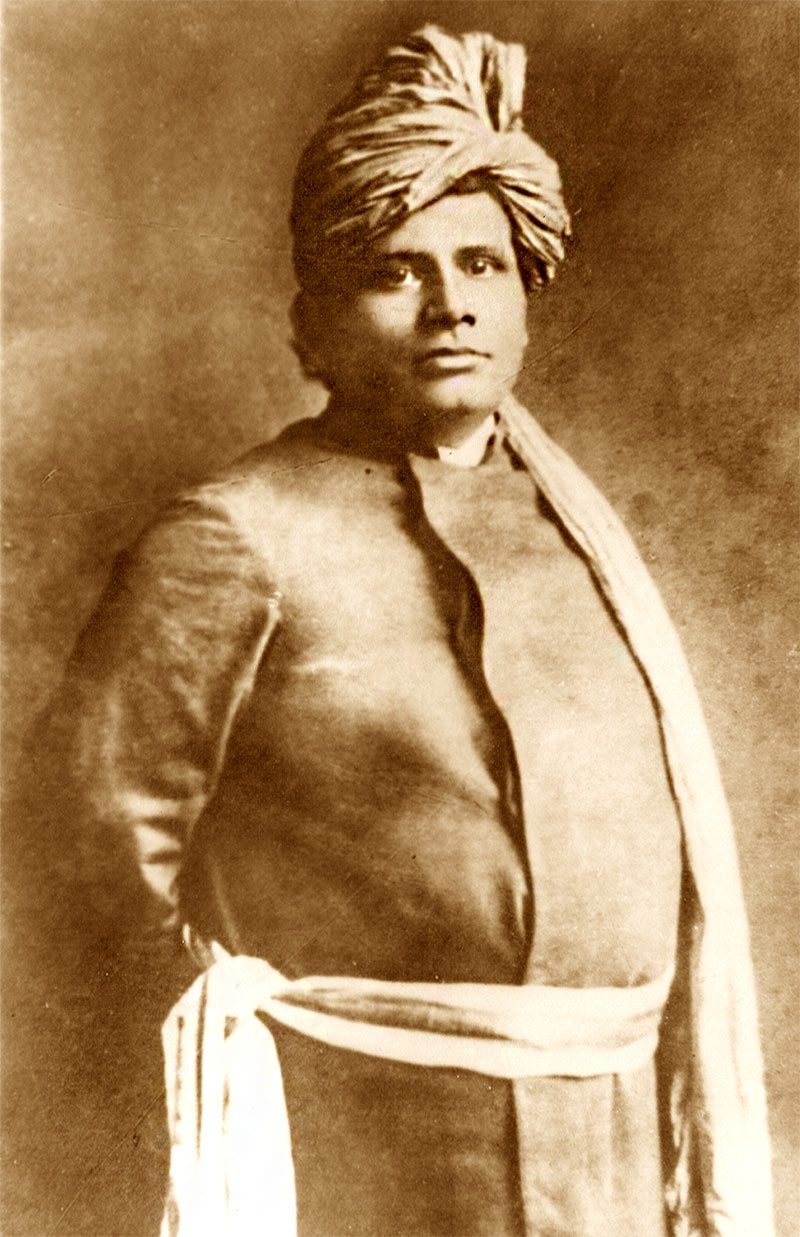 the 19th-century Indian Hindu SHYPERLINK “https://en.wikipedia.org/wiki/Sant_(religion)”aint regarded as the Avatar of the modern age. He established the monthly Bengali magazine Udbodhan of Ramakrishna Math and later, at the behest of Vivekananda, went to America in 1902 and took charge of the San Francisco Centre. One of his contributions was the construction of a new building in San Francisco which came to be known as the Hindu Temple. He passed away in January 1915. 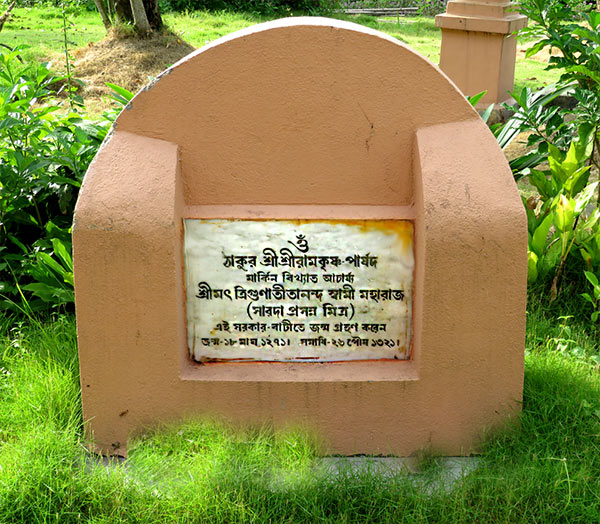 Early life
Trigunatitananda was born as Sarada Prasanna Mitra, on 30 January 1865. He was born to an aristocratic family in the village of Naora in Bhangar I, (now in South 24 HYPERLINK “https://en.wikipedia.org/wiki/South_24_Parganas”Parganas) near Calcutta. Sarada was enrolled in the Metropolitan Institution at Shyampukur, Calcutta. This was a school of Iswar Chandra Vidyasagar, a social reformer, educator and scholar of 19th century India. The headmaster there was Mahendranath Gupta, better known as “M”, the author of The Gospel of Sri Ramakrishna (or Sri Ramakrishna Kathamrita in Bengali). Sarada did not do well in the school leaving “entrance examination”. “M” took young Sarada to Dakshineswar temple to meet Ramakrishna on 27 December 1884. At a very young age Sarada had shown a religious disposition and this was reinforced by contact with Ramakrishna, whom he visited often after joining the Metropolitan college. When his parents decided to arrange a marriage for him according to Indian customs, he left his house for Puri in January 1886, but was brought back by his parents. He appeared for and passed his First Arts examination. He dedicated himself to the service of Ramakrishna when the latter was terminally ill in Cossipore Garden House. After Ramakrishna died, Sarada began to stay with Narendranath Dutta (later Vivekananda) and a group of dedicated direct disciples of Ramakrishna, who renounced worldly life, in “Baranagar Math”.
Monastic life
In January 1887 Sarada took the vows of complete renunciation or sannyas along with his brother disciples, and came to be known as Trigunatitananda (one who has surpassed the three gunas or attributes and have attained supreme bliss, an enlightened one. Triguna: the three gunas or attributes of Sattva (contemplation), Rajas (activity) and Tamas (darkness or passivity)). In 1891 Trigunatita started on pilgrimage for Vrindaban, Mathura, Jaipur, Ajmere, Kathiawar. At Porbandar he met Vivekananda. After that he returned to Baranagar Math. In 1895 he set out on foot for Mount Kailash and Lake HYPERLINK “https://en.wikipedia.org/wiki/Lake_Manasarovar” Manasarovar.  He came back to Calcutta and stayed in the house of a devotee and led a contemplative life for some time. After some time he went to stay in the newly formed Alambazar Math of the Ramakrishna order. He was influenced by Vivekananda’s ideal of service and philanthropic activities. In 1897 when the district of Dinajpur in Bengal was in the grip of a famine, he went there and organised relief work. Vivekananda had planned a magazine to spread the message of Vedanta. For this purpose, a press was bought and Trigunatita was put in charge of publishing the magazine, Udbodhan. After Yogananda’s death, Tigunatitananda became a personal attendant to Sarada Devi for a time. His brother Ashutosh Mitra, later a monk of the Ramakrishna Order, also served her for a time.
Work in America 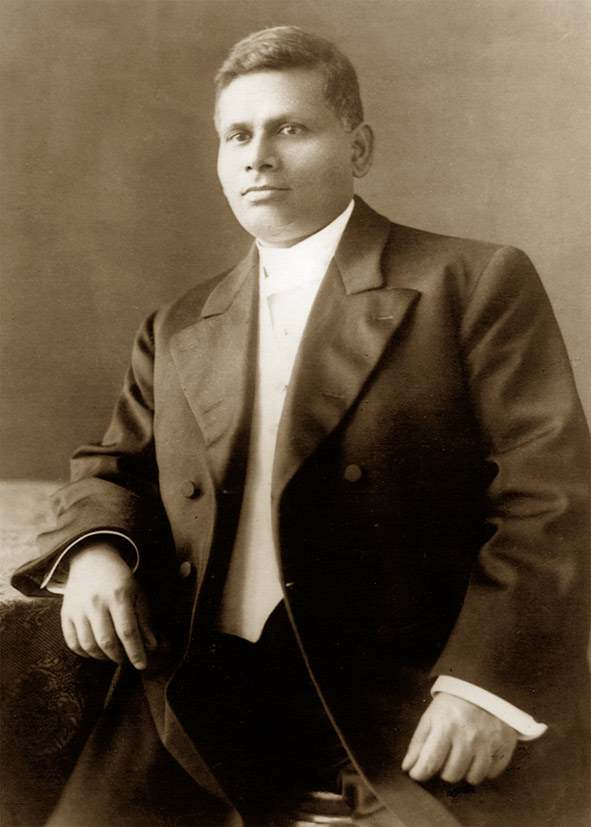 In 1902 when Turiyananda returned from America prematurely due to ill health, Trigunatitananda was sent to replace him. On 2 January 1903, he reached San Francisco and was taken to the house of T.H. Logan, president of the San Francisco Vedanta society. A few weeks later he went to the home of Mr. and Mrs C.F. Peterson where he was to make his headquarters. Classes and lectures were held regularly. Before long the flat became too small for the Society’s operations, and they moved to another flat at 40 Steiner Street. In 1904, because of the work involved, Trigunatitananda felt that a new building for Vedanta Society of San Francisco was needed. Funds were raised, and in January 1906 the building in Webster Street, which came to be known as the first Hindu Temple in the western world, was established and opened to the public. The Swami published a pamphlet explaining each tower and detail of the structure. “This temple,” the pamphlet began, “may be considered as a combination of a Hindu temple, a Christian church, a Mohammedan mosque, a Hindu math or monastery, and an American residence.” Then it goes on to explain the symbolism built into the temple.

About this temple Trigunatitananda had said, Believe me, believe me, if there is last tinge of selfishness in building this temple, it will fall, but if it is the Master’s work, it will stand.[2]:182 It survived unscathed the major 1906 San Francisco earthquake. Soon after this a monastery was set up with about ten monks, and a convent. In 1909 the Swami started a monthly magazine called the Voice of Freedom, which was produced for seven years, based on the ideals of Vedanta.

Every year the Swami led a selected group of students to Shanti Ashrama, in the San Antone valley in California, a spiritual retreat which was established by Turiyananda, his predecessor and a brother disciple. The inmates spent their time in meditation and prayer.

Last days
Trigunatita suffered from chronic rheumatism  disease, but continued his work. On 28 December 1914 he was holding a Sunday service when a bomb was thrown onto the pulpit by a former student. That student died and Trigunatita was fatally injured. On his way to the hospital he was only concerned about the student. A nurse who attended on him commented: “I have never seen such a calm, uncomplaining, and enduring patient in my life. He died on 10 January 1915. In 1916 his relics were installed on the top of the highest hill, Siddha Giri, the “Hill of Realization” at Shanti Ashram.
Quotes
Legacy